Replacing the door mirror on a BMW Z4

Are you a big fucking moron idiot who gets their car into fights with the garage door? Of course you are! Don’t worry, I know the feeling.

Anyway, let’s get you back up and running with mirrors on both sides.

If you’re lucky, you just twisted the mirror around and you can twist it back into shape. If the mirror assembly is still firmly attached to the body, you can try twisting it back the right way around and seeing if it locks back into place. There’s a stiff spring intended to resist this motion, so give it a good pull and twist. If it’s all flopping around, like mine was, you’re out of luck and will need to order a new part.

You can see the various options at RealOEM.com. My car does not have auto-dimming mirrors, nor do the mirrors fold, and I wanted the passenger side assembly, so my part number was 51167189708. Shopping around led me to GetBMWParts.com where I found the best price. Expect to pay a bit north of $200 for the part. After pulling out your credit card, spend a few minutes reminding yourself to be more fucking careful getting out of the garage next time, yeah?

The part that ships will be the whole assembly, including the painted shell. Except the shell you get won’t be painted, it’s just solid black. If your old shell is recoverable (mine was), you can take apart the old assembly and swap the shell onto the new one and avoid having to pay to have the new shell painted. The other possibly recoverable part is the mirror glass itself. Instructions for disassembling the old mirror follow after the door disassembly.

To get started, you’ll need a torx T10 and either a T15 or a T20 driver (I’ve forgotten); an approximately 6mm hex driver (again, I’ve forgotten the exact size); and some trim pry tool. A few other tools can come in handy, and I’ll mention them through the guide. 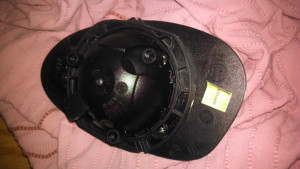 The above is an image of the mirror with the circle in the locked position, covering the tabs on the servo. Below is the unlocked position. It only turns a small amount. Notice the servo tabs are free in the below picture, which lets the mirror/plastic circle assembly come off of the servo. 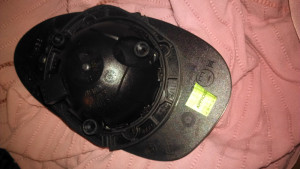 Now let’s start taking the door apart so we can swap mirror assemblies.

Pop off the cap behind the door handle. I used a box cutter to pry the little bit of plastic off. BMW’s TIS says to use a piece of sticky weather trim tape to pull it out. Whatever. Take out the torx screw behind there. 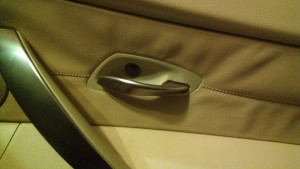 Pry off the trim from the door grip with a trim removal tool (ten bucks at AutoZone, and way better than a screwdriver). Photo shows you where the clips are. Start from the bottom.

There are four screws back here, two small torx and large two hex-head screws. The lower screw had a bunch of noise proofing material stuck on it in my car. Pull the grip straight out from the door.

Pop out the airbag label with your trim tool. There are three notches on each side. Under there should be another screw to remove. Try not to drop the screw into the door panel. 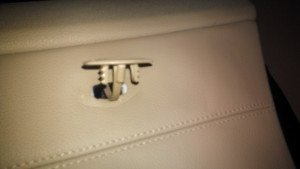 Next is the hard part, removing the door panel. The image below shows the clips that hold it onto the lower part of the door. I used the trim tool as a lever to get my fingers under, and then pried them out. I found it was easiest to start with a bottom corner and pop them out one by one. The top of the panel will still be attached to the door. 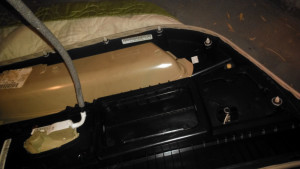 The upper clips were the hardest part of the whole process. The picture just below shows how they work. There’s a series of metal tabs which you can try to push down to release from the slots in the second picture below. You can also just use brute strength to pull them out. Good luck! 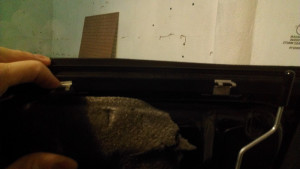 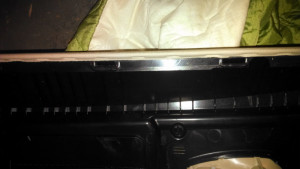 I unplugged the speaker wire and the other wire over there, then rested the panel on the stacked blanket. Be sure to note where the speaker wire is plugged in before you unplug it! There are two identical slots, I’m not sure why.

Next take off the speaker next to the window. This is pretty easy, push in the top of the triangle and it will pop out, then pull the whole bit up and out. Unplug the speaker wire (screwdriver may help) and set it aside. 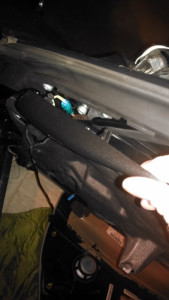 Next, it’s time to take the old assembly apart. If you’re not recovering any of the old parts, skip this.

There’s a handful of screws, thankfully all the same small torx screws. The first screw is on the bottom of the mirror, in a strip of black plastic. After the screw is out, pop off the little plastic bit that the screw went through.

Next, there are the three servo screws. With those out, you can unplug the servo and remove it. Finally, there are four screws through the plastic support into the shell. The shell is then held on with two clips on the outside of the mirror. Use a trim removal tool or something to pop out these clips. The shell should now be free.

Assembly is the reverse of disassembly. Thanks for reading!

No seriously, it’s pretty easy. Make sure to get the servo aligned correctly. On the passenger side, the two rectangular slots should face up and left. I’m not sure about the driver side.

Unless you’re an idiot (hi!), put the whole mirror assembly back together before you put it on the car. Shove the cable through the hole and squeeze the rubber bit into its place. The slots for the silver screws on the new part aren’t threaded, so they’ll take some muscle to get in. Hook all the wires back up and make sure to slot the door handle cable into its holder on the door panel.

Did you find this helpful? Have any questions about the process? Want to share your own ran-the-car-into-the-house story? Leave a comment below!